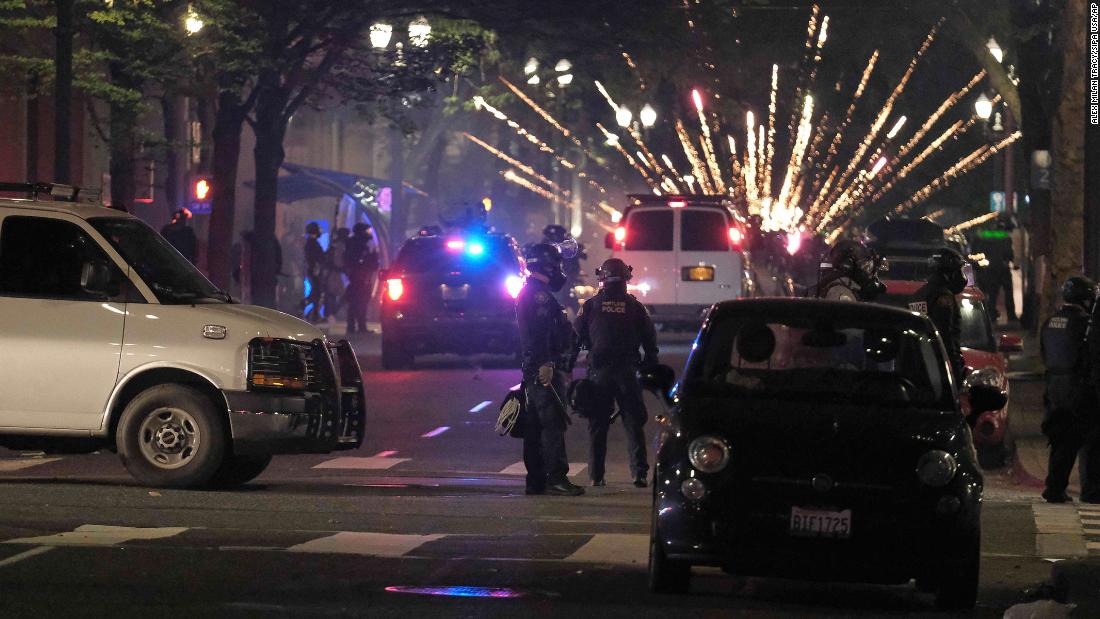 The request is aimed specifically at the Department of Homeland Security (DHS) personnel who have been captured on various videos arresting protesters and putting them in unmarked SUVs.

Demonstrators in Portland have been protesting racial inequality and police brutality for the last 50 nights, US Attorney Billy J. Williams said in a statement. Federal authorities have protected the Mark O. Hatfield US Courthouse and, at times, interaction between protesters and law enforcement has gotten violent. Last weekend, one protester was seriously injured after the man was shot in the head with impact munition.

Oregon’s governor and Portland’s mayor demanded the troops be withdrawn and a US senator joined them in condemning the arrests.

Merkley also tweeted one video of such an arrest showing two masked, camouflaged individuals with generic “police” patches, detain a person dressed in a black outfit and place them in an unmarked van before driving away.

US Customs and Border Protection (CBP) admitted to being one of the agencies involved in arresting protesters.

“Violent anarchists have organized events in Portland over the last several weeks with willful intent to damage and destroy federal property, as well as, injure federal officers and agents,” the agency said in a statement to CNN. “These criminal actions will not be tolerated.”

The statement said CBP agents suspected the individual seen in the video Merkley re-tweeted of “assaults against federal agents or destruction of federal property,” and that they moved the individual to a safer location for questioning after they saw “a large and violent mob move towards” them. CNN could not independently verify what happened before or after the video was recorded.

CBP Commissioner Mark Morgan tweeted the agency will continue to arrest “violent criminals that are destroying federal property.” He also said CBP personnel are clearly marked as federal officers and have unique identifiers.

“You will not see names on their uniforms b/c these same violent criminals use this information to target them & their families, putting both at risk. As Acting Commissioner, I will not let that happen!” Morgan tweeted.

“This is not the America we want. This is not the Portland we want,” Wheeler said at a news conference. “We’re demanding that the President remove these additional troops that he sent to our city. It is not helping to contain or de-escalate the situation it’s obviously having exactly the opposite impact.

Acting DHS Secretary Chad Wolf, who visited the city Thursday, defended the actions of his officers, saying in a tweet, “DHS officers were assaulted with lasers and frozen water bottles from violent criminals attempting to tear down federal property. 2 officers were injured.”

“Our men and women in uniform are patriots,” he said in another tweet that featured uniformed officers who looked to be similar to the ones shown in the video from earlier in the week.

Oregon Gov. Kate Brown, described the arrests as “a blatant abuse of power by the federal government” in a tweet Thursday.

Brown tweeted she told Wolf “that the federal government should remove all federal officers from our streets.”

“His response showed me he is on a mission to provoke confrontation for political purposes,” she tweeted. “He is putting both Oregonians and local law enforcement officers in harm’s way.”

“I was kidnapped off the street in my own city for non-violently protesting and showing up in solidarity,” Pettibone said. “About four people just out of the van that pulled up in front of me, and my first reaction was I tried to get away.”

Pettibone said he was held for about two hours and plans to talk to the National Lawyers Guild, but will follow up with the ACLU.

The American Civil Liberties Union of Oregon sued DHS Friday over the arrests.

The ACLU says DHS agents “have been deployed over the widespread objections of local leaders and community members, have been indiscriminately using tear gas, rubber bullets, and acoustic weapons against protesters, journalists, and legal observers.”

“This is a fight to save our democracy,” said Kelly Simon, interim legal director with the ACLU of Oregon.

The ACLU called the arrests unconstitutional in a tweet.

“Usually when we see people in unmarked cars forcibly grab someone off the street we call it kidnapping — what is happening now in Portland should concern everyone in the US,” the ACLU’s tweet read. “These actions are flat-out unconstitutional and will not go unanswered.”

As Fauci disagrees with T...