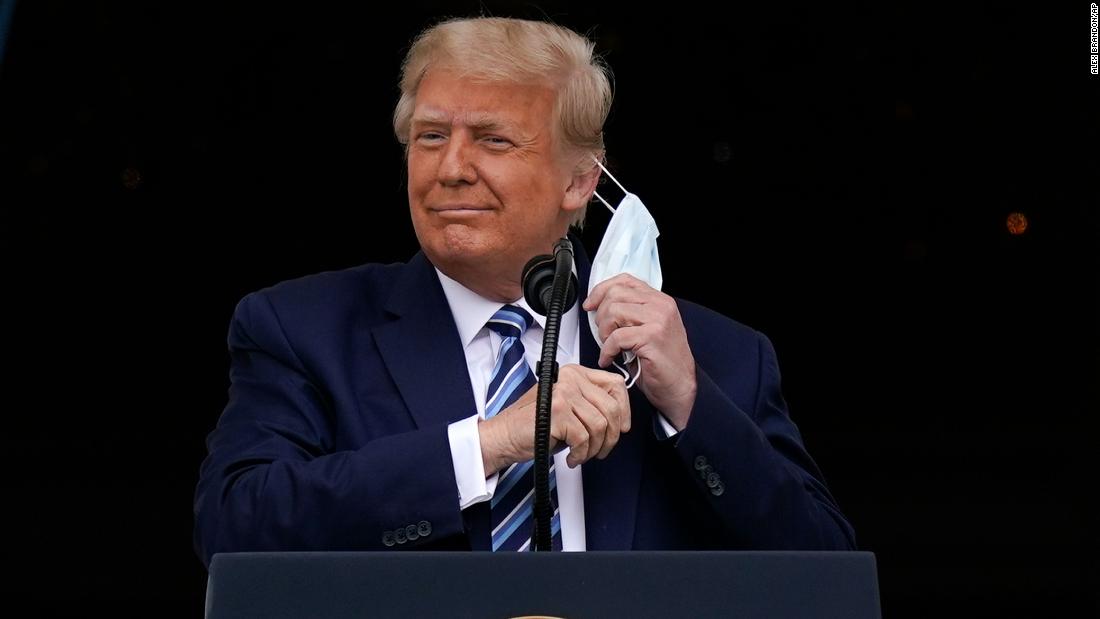 There was a chance for a strategic pivot by the President after he contracted Covid-19 that would have helped him shore up his flagging approval ratings on the handling of the virus. After learning a great deal about coronavirus, as he claimed during his stay at Walter Reed National Military Medical Center, he could have chosen a path of responsibility by using his platform to educate the public about the risks of the virus at a time when US cases are surging and doctors fear that the nation is entering a second wave.

But nine days after he announced his coronavirus diagnosis — and hours before his physician said he is no longer considered “a transmission risk to others” but did not say he had tested negative — Trump chose his familiar tactics of denial, risk and ignorance. Two weeks after one super-spreader event in the White House Rose Garden, he held another on the South Lawn with no social distancing. This time, it was before an audience of Black and Latino Americans, groups who have been disproportionately harmed by the pandemic.

Rather than mitigating risk, Trump is planning at least three campaign rallies next week in Florida, Pennsylvania and Iowa, stating Saturday, “We are starting very, very big with our rallies and with our everything” as he again threw caution to the wind.

In his speech from the White House balcony and during his interviews with right wing outlets like the Rush Limbaugh radio show on Friday, he embraced the only political strategy he knows — playing to his base, rather than attempting to broaden his appeal, as his campaign spirals toward Election Day. He still appears either unwilling or unable to see the huge drag that the public’s lack of confidence in his handling of the pandemic is having on his election prospects.
A Reuters/Ipsos poll released this week showed only 37% of Americans approved of Trump’s handling of the pandemic, while 59% disapproved. And the Pew Research Center found that Biden had a 17-point advantage over Trump when registered voters were asked who could better handle the public health impact of the coronavirus outbreak.
View Trump and Biden head-to-head polling

The President continued downplaying Covid-19 on Saturday, referring to it with his racist language as the “China virus” and claiming the US will “defeat it,” a day after he falsely claimed the experimental monoclonal antibody cocktail that he received from Regeneron was “a cure.”

“Science, medicine will eradicate the ‘China virus’ once and for all,” Trump said Saturday, noting flare-ups in Europe and Canada, but not mentioning the rising number of cases in the United States. “A lot of flareups, but it’s going to disappear, it is disappearing and vaccines are going to help.”

Trump’s physician, Navy Cmdr. Dr. Sean Conley, said in a memo about the President’s health Saturday evening that he is “now at day 10 from symptom onset, fever-free for well over 24 hours and all symptoms improved.”

“The assortment of advanced diagnostic tests obtained reveal there is no longer evidence of actively replicating virus,” Conley said, but he did not explain what “advanced diagnostic tests” the President received. And the White House still will not say when Trump last tested negative before he announced his positive diagnosis early on October 2, which is important context for knowing when he was contagious.

Conley has in the past seemed willing to bend to the political desires of a President eager not to appear ill and to quickly return to the trail. This latest White House memo, coming just ahead of his planned rallies, continues to be opaque with the medical details about Trump’s condition, leaving many questions about Trump’s current condition unanswered.

While the White House says the President’s health is improving, doctors and public health officials are alarmed by the recent rise in Covid-19 cases, a trend that could accelerate as more Americans move indoors and the weather grows colder.

The latest forecast from the influential coronavirus model from the Institute for Health Metrics and Evaluation at the University of Washington School of Medicine projects that there could be nearly 395,000 US coronavirus deaths by February 1, 2021. More than 214,000 Americans have already died, according to data from Johns Hopkins University.

“We are all seeing increasing numbers of Covid-19 patients who are coming into our ERs, who are getting really sick, requiring hospitalization and even intensive care,” Dr. Megan Ranney, an emergency physician with Brown Emergency Medicine, told CNN’s Erica Hill on “Newsroom” Saturday. “We are all deeply afraid that this is the beginning of that dreaded second wave.”

When asked Saturday whether Trump should be resuming campaign rallies, Democratic nominee Joe Biden said the President should make “clear he is not a spreader, like Dr. (Anthony) Fauci said,” referring to a recent statement from the director of the National Institute of Allergy and Infectious Diseases that Trump’s Rose Garden ceremony for Amy Coney Barrett, his Supreme Court nominee, was clearly a “super spreader.”

As Trump heads back out on the campaign trail, attention in the Capitol this week will shift to the Supreme Court confirmation hearings for Barrett, who would solidify a 6-3 conservative majority on the court, and whether there is any hope of Congress reaching a deal on stimulus negotiations to help the millions of Americans who are struggling financially due to the pandemic.

Shortly after leaving the hospital last week, Trump tweeted that he was halting negotiations on another coronavirus stimulus package. He then abruptly reversed course — leading his administration to present a $1.8 trillion offer to House Speaker Nancy Pelosi.

“I would like to see a bigger stimulus package frankly than either the Democrats or Republicans are offering,” Trump said during his appearance on Limbaugh’s show after signing off on the $1.8 trillion proposal.

In a memo to her Democratic colleagues Saturday, Pelosi said the new proposal amounted to “one step forward, two steps back,” claiming that when the President talks about wanting a bigger relief package “his proposal appears to mean that he wants more money at his discretion to grant or withhold, rather than agreeing on language prescribing how we honor our workers, crush the virus and put money in the pockets of workers.”

She said the funding in the proposal for state and local governments, who are struggling with huge coronavirus-related costs, “remains sadly inadequate,” and cited other disagreements like Democrats’ desire for stronger OSHA protections for workers and Republican demands for liability provisions to protect businesses.

CNN’s Manu Raju and Phil Mattingly reported Saturday that some 20 GOP senators spoke up in opposition to the size of the Trump administration’s $1.8 trillion offer during a call with White House chief of staff Mark Meadows and Treasury Secretary Steve Mnuchin. The package has virtually no chance of passing the Senate.

But not all Democrats were pleased with Pelosi’s decision to balk at the latest White House offer. Former Democratic presidential candidate Andrew Yang argued that another infusion of direct relief for unemployed workers is an overdue “lifeline for millions of Americans.”

“It’s infuriating that it’s October and so many Americans are still waiting on a relief bill that should have been passed months ago. If I’m Nancy Pelosi, I take this deal. If I’m Mitch McConnell, I take this deal,” Yang told CNN’s Wolf Blitzer Saturday on “The Situation Room.”

“I have no idea why this is not being passed. Instead, they’re grandstanding and playing politics while people are hurting,” Yang said. “So again, Nancy Pelosi and Congress please, I know you don’t love President Trump, but the American people need relief. And this is a good deal for millions of Americans.”