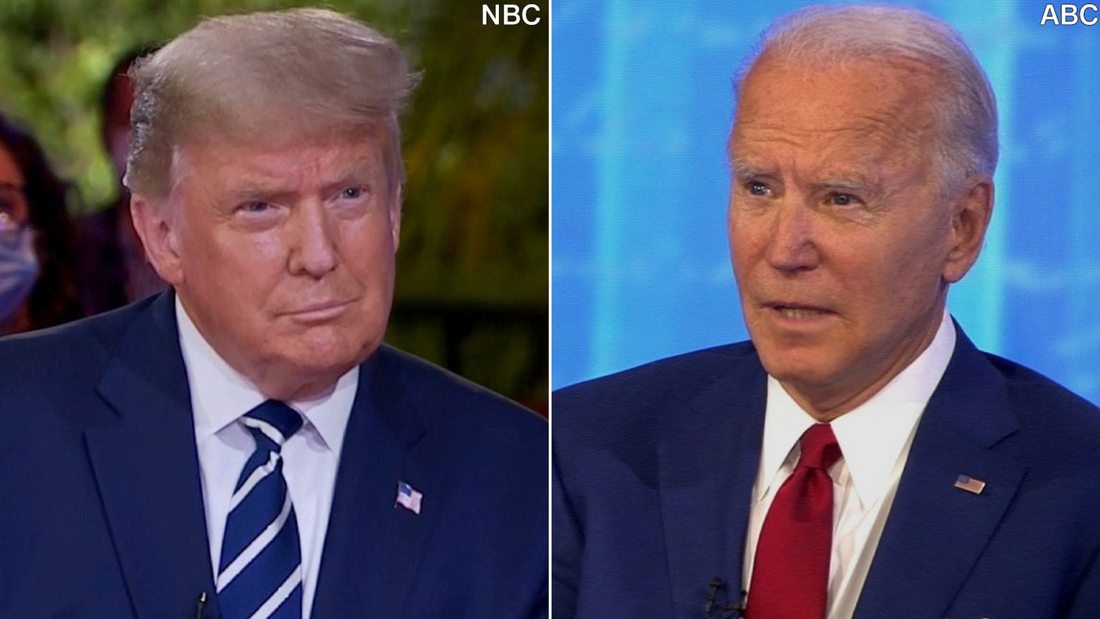 The problem with their town halls, which were drastically different in tone and substance: Americans could only pick one to watch.

No hour has better illustrated the alternate reality in which Trump exists than Thursday’s 60-minute town hall.

Trump claimed the science is still out on wearing masks, despite the universal view of health experts — including within his own administration — that it can mitigate the spread of coronavirus.

He refused to say whether or not he believed Democrats were running a satanic pedophile ring, shrugging when pressed and saying only, “I have no idea.”

He claimed with no evidence that ballots with his name on them had been found in garbage cans.

And he would not affirm that a conspiratorial tweet he retweeted claiming Osama Bin Laden is still alive is false, saying, “People can decide for themselves.”

“I don’t get that,” moderator Savannah Guthrie said after that last equivocation. “You’re the President, not somebody’s crazy uncle.”

Contained within Trump’s regular venues of conservative television and Twitter, the upside-down world in which he exists sometimes loses its impact. But in front of everyday voters, his answers appeared wildly detached from any accepted version of reality. Voters deciding between Trump and Biden find themselves choosing less between two candidates than two entirely opposite planets.

Since leaving the hospital, Trump has been dialing into friendly outlets to recount his ordeal and trash Biden. Over the past week, he’s phoned Fox News or Fox Business five times, along with chats on Newsmax and Rush Limbaugh.

The warmth of a conservative safe space is where Trump has thrived for most of his presidency. When he emerged onto NBC’s set, things felt much colder.

A lawyer by training, Guthrie would not let up when Trump evaded questions about his coronavirus diagnosis, whether he was tested the day of the last debate, his stance on white supremacy, his views on QAnon or his view of mail-in voting.

Trump was conducting a town hall instead of a debate by choice; he pulled out of a second face-off with Biden when the Commission on Presidential Debates insisted it be virtual. But the result was 20 minutes of contentious live grilling with only himself in the spotlight — a rarity for a President who sticks mostly to a friends in conservative media.

Without a rival on the stage, Trump was alone in fielding the questions. And he had no opponent to pepper with his own attacks. Instead, Trump found himself on the defensive and increasingly angry — including scoffing at a question Guthrie asked by calling her “cute.”

It’s the type of performance some of Trump’s advisers had hoped to avoid, recognizing it is that type of behavior that has turned off women voters and senior citizens. During one of the commercial breaks, Trump’s strategic communications director Alyssa Farah came out and spoke to Guthrie before joining other aides to speak with the President.

Trump appeared more moderated when answering questions from the town hall participants. But the ease of conducting four years of friendly interviews became clear when it came time for his final question: Why should voters give him a second term? Instead of laying out what he’d do differently, Trump listed only what he’d accomplished so far and concluded with: “Next year is going to be better than ever before.”

The contrast between the candidates’ approaches and their town halls’ topics was dramatic — especially when confronted with controversial remarks they’d made in the past.

One clear window into Biden’s tactics in a town-hall setting, with voters pressing him one-on-one, came when a young Black man recalled the former vice president’s flip comment to radio host Charlamagne tha God that if someone was struggling to decide between supporting him and Trump, “you ain’t Black.”

“Besides ‘you ain’t Black,” the man asked, how could Biden convince Black voters to take part “in a system that has failed to protect them?”

Instead of addressing his controversial remark, Biden delved into a several-minutes-long litany of policy specifics aimed at helping Black people. On his list: Tripling Title I funding for low-income schools; helping first-time homebuyers with a $15,000 credit for downpayments so that low-income families can begin to build wealth; $70 billion in new funding for historically Black colleges and universities; and government-backed loans for young Black entrepreneurs.

Asked if he’d heard enough, the young man responded, “Uh, I think so.” Then Biden offered to continue their conversation after the town hall ended.

It was one of a number of long-winded answers from Biden on Thursday night, and underscored Biden’s style and his efforts to use the town hall to focus on how his plans would affect ordinary Americans. It’s the implicit contrast Biden has long sought to offer voters: Sobriety in the face of Trump’s bombast, and a connection to the concerns of low- and middle-income Americans who he says have been ignored by Trump.

Trump campaign senior adviser Mercedes Schlapp tweeted during Biden’s town hall that watching it “feels like I am watching an episode of Mister Rodgers Neighborhood.” That was exactly the tone Biden was aiming for.

Biden didn’t clarify his position Thursday night on the push by some progressives to add seats to the Supreme Court — but he said he would do so before the election.

Pressed on an issue he has largely ducked since Trump nominated Amy Coney Barrett to fill the seat of the late liberal Justice Ruth Bader Ginsburg, Biden said he is “not a fan” of court-packing, but whether he ultimately changes his mind “depends on how this turns out” and “if there’s actually real, live debate on the floor” of the Senate about Barrett’s confirmation.

If that does not take place and Republicans rush to confirm Barrett before the election, he said, “I’m open to considering what happens from that point on.”

Biden said he would take a clearer position on court-packing before the election, after seeing how the confirmation process plays out.

But he also said he was hesitant to take a specific position at this stage because he wants attention to focus on what confirming Barrett and handing conservatives a 6-3 Supreme Court majority would mean for abortion rights, health care, LGBTQ rights and more.

“If I answer the question directly, then all the focus will be on, what’s Biden going to do if he wins, instead of if it is appropriate what is going on now,” Biden said. “This is a thing the President loves to do, which is always take our eye off the ball.”

Ever since Trump entered Walter Reed National Military Medical Center, two of the persistent unanswered questions about his diagnosis have been what his lung imaging showed and whether he tested negative ahead of the first presidential debate.

His physician, Dr. Sean Conley, repeatedly refused to say when pressed directly, saying it was a matter of patient confidentiality. Trump’s other aides have shrugged off the testing question, claiming they didn’t want to look backwards.

Pressed Thursday on the same issues, Trump was similarly evasive. But his non-answers were telling.

Asked directly if he was diagnosed with pneumonia, Trump said no — but acknowledged his lungs had been affected.

“They said the lungs are a little bit different, a little bit perhaps infected,” he said. It was the first acknowledgment, beyond revealing he’d required supplemental oxygen, that the President’s lungs had been impacted.

Trump claimed he “didn’t do too much asking” and that he “didn’t have much of a problem with the lungs,” but added that “obviously I felt there was something missing.”

Asked later when his last negative test was before his Covid diagnosis, Trump tried to avoid the question, saying he was tested very often. But he was pressed on if he tested negative on the day of the first presidential debate, to which he responded: “I don’t know, I don’t even remember.”

His answer affirmed what sources have told CNN: that the testing regimen long touted by the White House as their main coronavirus mitigation measure wasn’t nearly as extensive as they claimed.