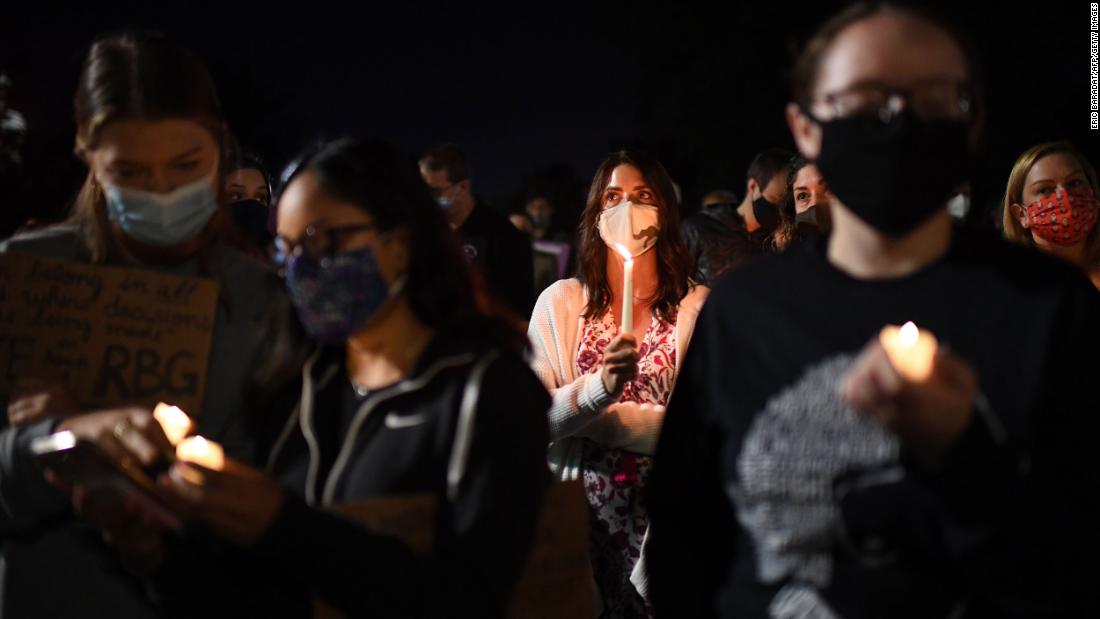 President Donald Trump and Senate Republicans spent the weekend rolling out an aggressive power play to try to solidify an unassailable and generational majority on the nation’s top bench possibly even before an election that is only 43 days away.
Democrats are meanwhile mobilizing to maximize what they see as possible benefits of the nomination struggle for Joe Biden’s campaign and to prevent the President from using the sudden confirmation fight to turn the focus away from his disastrous mismanagement of the coronavirus emergency. The confrontation is heating up with some Americans already taking part in early and absentee voting, and only a week before the first critical presidential debate between the President and the former vice president in Ohio.
The death of Ruth Bader Ginsburg on Friday injected an extraordinary new dimension into what was already shaping up as the most contentious election in decades. Her passing also unleashed an even more divisive than normal battle for a replacement since Senate Majority Leader Mitch McConnell is pressing ahead to confirm a pick Trump may make within days despite refusing to move on then-President Barack Obama’s nominee, Merrick Garland, many months before the 2016 election. Back then, McConnell said voters should decide the destiny of the court in choosing a new President.

But McConnell turned his back on his own made-up rule with a Republican in the White House. This Republican hypocrisy led to an absurd spectacle on Sunday talk shows of lawmakers and officials trying to explain away their own disingenuousness. The GOP will not care, however, since this pick will likely enshrine a decades-long conservative majority with the capacity to shape vast areas of American life — from voting and gender rights to environmental regulation and big business matters. The court could also become a thorn in the side of future Democratic presidents.

Trump reveled in his opportunity to nominate his third Supreme Court Justice at a rally in North Carolina on Saturday night. “It will be a woman, a very talented, very brilliant woman,” Trump said. “I haven’t chosen yet, but we have numerous women on the list.”

Among the President’s top choices, according to CNN reporting, are Amy Coney Barrett, whom Trump previously nominated to sit on the 7th US Circuit Court of Appeals, and Barbara Lagoa, whom he appointed to the 11th US Circuit of Appeals in 2019. Lagoa is Hispanic and from Florida and could fit well with Trump’s reelection strategy, which depends on him winning the vital swing state.

Biden seized on McConnell’s gall in an effort to make the case that Republicans who won the presidency despite losing the popular vote are embarked on an extreme power grab and must be reined in.

“Don’t go there,” Biden said Sunday, directly appealing to GOP senators. “Uphold your constitutional duty, your conscience, let the people speak. Cool the flames that have been engulfing our country. We can’t keep rewriting history.”

Two Republicans, Sen. Lisa Murkowski of Alaska and Sen. Susan Collins, who is locked in a tight reelection fight in Maine, have already said that they oppose taking up Trump’s nomination before the election, leaving McConnell almost no margin for error if he is to fulfill Trump’s wish for a vote before the election. He can only afford to lose one more Republican senator and still confirm the pick before November 3 with a tie-breaking vote from Vice President Mike Pence.

The exact dynamics inside the Senate GOP will become more clear later this week as the chamber returns to work and members gather for their policy lunch.

Biden plans to make the Supreme Court duel into a new platform for his assault on the President on health care, sources told CNN. The approach will allow him to also leverage criticism of Trump’s performance on the pandemic.
The Court is already scheduled to hear oral arguments in the administration’s latest attempt to kill off Obamacare the week after the election, and Democrats will argue that the new nominee could help finally seal the law’s fate and crush popular provisions like a ban on denying coverage to people with pre-existing conditions.

The President pivoted forcefully to the new Supreme Court battle after a week when he became increasingly desperate to deflect from the pandemic, which included misleading and often false accounts, for example, of the speed with which Americans can expect to see a vaccine needed to end the disaster.

View Trump and Biden head-to-head polling
Trump’s claims that the country has been turning the corner on the virus are being comprehensively refuted by data, which shows a rising number of cases and daily coronavirus deaths averaging around 800. The number of Covid-19 deaths in the United States is about to top the staggering barrier of 200,000 after it emerged in Bob Woodward’s new book that the President understood the seriousness of the disease back in February but refused to level with the country. Some experts say this may have potentially caused tens of thousands of unnecessary deaths.

Trump’s hopes of talking about anything but the pandemic look slim given the worsening situation. The number of new Covid-19 cases has increased by at least 10% in 31 states over the last week, according to data Sunday from Johns Hopkins University. The test positivity rate — the percentage of new test results that are positive — is rising in 25 states, according to the Covid Tracking Project, fulfilling the fears of experts who warned of a post-Labor Day spike.

While large crowds of mourners gathered at the Supreme Court to pay tribute to Ginsburg, the White House was embarking on an aggressive plan to put her replacement — and a 6-3 conservative majority — in place.

“Justice Ginsburg was confirmed within 43 days of her nomination,” Pence’s Chief of Staff Marc Short told Jake Tapper on CNN’s “State of the Union” Sunday, though it actually took 50 days from the presidential announcement.

“Today, we sit here 44 days out from election, so it’s certainly possible,” he said, referring to the chances of getting a new justice on the bench by November 3.”But I think that the President’s obligation is to make the nomination. We will leave the timetable to Leader McConnell.”

Republican senators blew past accusations of hypocrisy when asked about the tactics of McConnell, who has made reshaping the federal judiciary the priority of his leadership of the Senate.

Wyoming Republican Sen. John Barrasso laid out his expectations for a swift confirmation on NBC’s “Meet the Press” Sunday. “The President is going to make a nomination. I believe it’s going to be this week. And Lindsey Graham, chairman of the Judiciary Committee, we will hold hearings. And there will be a vote on the floor of the United States Senate this year.”

If the Republicans cannot ram through a vote before the election, it could lead to a massive political conflagration should Democrats win the presidency and take back the Senate, then have to watch as a new justice is confirmed in a lame duck session by McConnell.

Such possibilities are making for some treacherous politics for both sides ahead of the election.

Trump, for example, is clearly hoping that a Supreme Court fight will supercharge his political base and send an overwhelming wave of conservatives into polling places. But there is also the chance that the Supreme Court battle could backfire on the President. It could boost liberal turnout among voters who fear, for example, that the new conservative majority will seek to limit or even outlaw the right to an abortion. A prolonged fight over this issue ahead of the election may further weaken Trump’s already compromised position among suburban women voters.

A new Reuters-Ipsos poll conducted on Saturday and Sunday found 62% of Americans agreed that the winner of the election should appoint Ginsburg’s replacement. But the poll also pointed to partisan divides and public uncertainty since 46% of those asked agreed that Trump should nominate a replacement before his term ends.
The audacity of the President and McConnell is also fueling Democratic intensity over what many in the party will view as two stolen Supreme Court seats. Former President Bill Clinton said on CNN’s “State of the Union” that for “Senator McConnell and President Trump, their first value is power. And they’re trying to jam the court with as many ideological judges as they can.”

“You can’t keep a democracy if there’s one set of rules for one group and another set for everybody else,” Clinton said.