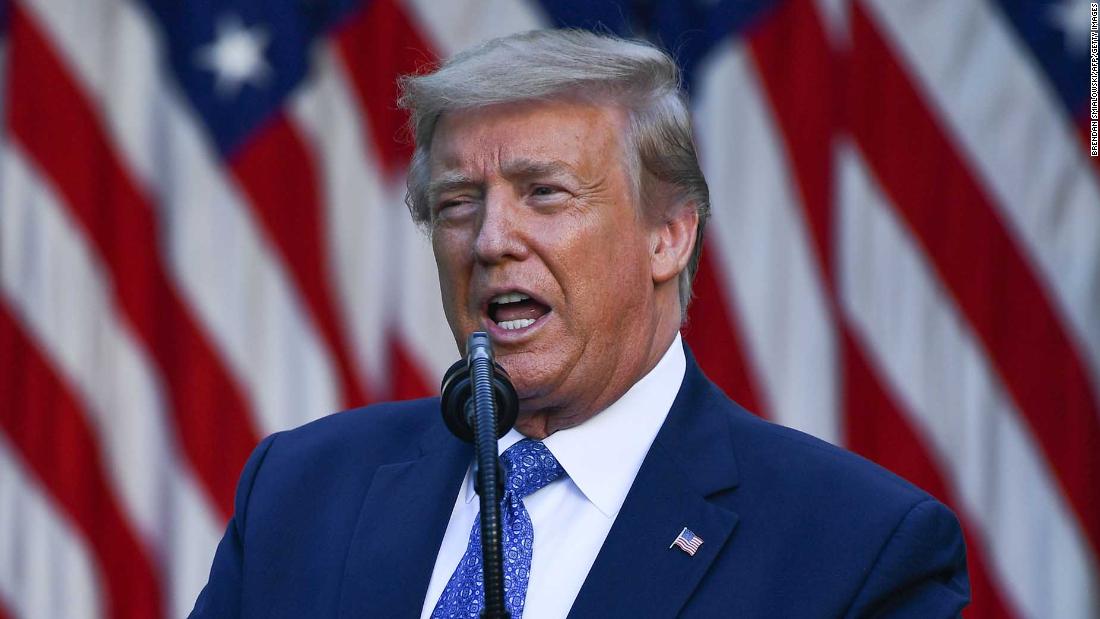 Trump has been painting a dire picture of a country teetering on the edge of lawlessness, accusing leftist anti-fascist group Antifa of orchestrating looting and trying to create the appearance of a scenario that only a strongman leader could solve.

In reality, increasingly violence-free nationwide protests with peaceful crowds braving the implications of a pandemic are providing exactly the opposite impression Trump is trying to portray with his dystopian rhetoric.

But Trump’s team is beginning to signal a shift that might see the President tone down the rhetoric in a bid to win back independents and moderate suburban Republicans that he needs to win in November.

“I believe you’re going to be hearing from the President this week on this topic in some detail. And I would ask you maybe to reserve judgment until after that time,” Housing and Urban Development Secretary Ben Carson told Jake Tapper on CNN’s “State of the Union.”
White House officials are debating a plan for Trump to potentially address the nation on race and national unity, sources told CNN’s Kristen Holmes and Sarah Westwood on Sunday.
They believe that the largely peaceful protests over the weekend validate the President’s tough line, the sources said, and he plans to exploit the calls by some liberals for defunding the police to put Biden on the spot.
Trump’s apparent bid to turn around perceptions of his leadership on race and policing follows a series of polls showing him trailing Biden, outside the margin of error, ahead of November’s matchup.

But any effort by Trump to address racial issues and police brutality in the wake of the death of Floyd with a police officer’s knee on his neck is likely to face a huge credibility test given his own recent conduct, a long history of using racial rhetoric to advance his political career — and his habit of undermining scripted speeches with his own inflammatory asides and tweets.

In recent days, Trump’s hardline stance and vow to “dominate” protesters in a “law and order” crackdown has included the use of federal forces to clear a peaceful demonstration ahead of his bizarre photo-op outside an iconic Washington church. And on Friday, and in the poorest of taste, Trump invoked Floyd’s name during a bill signing ceremony touting a surprise dip in jobless figures.

Over the weekend, the President retweeted a post critical of Floyd’s character. And Trump’s campaign team sent out a text reading: “Liberal THUGS are destroying our streets.”

All this has prompted a cadre of senior former generals, including former Defense Secretary James Mattis and, on Sunday on CNN, former Secretary of State Colin Powell, to accuse Trump of deliberately dividing the country for political gain and threatening the basic founding principles of American democracy.

Days of protests appear to have evolved into peaceful affairs that seem little influenced by Trump’s demands for states to deploy active duty troops. Instead, the protests have taken on the trappings of a mass and diverse political movement that is now sweeping the globe.

“I want LAW & ORDER!” Trump wrote on Sunday in a tweet that was characteristic of his attempts to construct an alternative reality to boost his political goals.

Most protests, apart from some in New York City, have been peaceful for days. Curfews in cities including New York, Buffalo and Philadelphia are being lifted. DC hasn’t had a curfew since Wednesday.

In reality, a flurry of cellphone footage of violence perpetrated by police officers has undermined Trump’s accusations against protesters. And the sense of a public order crisis and the fear that the President needs to perpetuate for his strategy to work has noticeably ebbed in recent days, while calls for police reform and solidarity with black Americans who say they are victims of institutionalized racism has grown.

Trump’s apparent bid for a reset comes as Biden seeks to project the empathy and leadership that the President has failed to summon in the last few weeks in a way that could shape their suddenly transformed duel in November.

The former vice president will make his most expansive move yet out of lockdown when he travels to Houston Monday. Biden will offer solace and likely share the lessons of his own life rocked by personal tragedy. But he will also be making an unmistakable political stand as he seeks to harness the power of protest to energize his campaign and to showcase the moral, calming leadership Trump has failed to offer.

As Trump considers a rhetorical shift, his closest aides are trying to rewrite the history of the most jarring events of last week.

On Sunday, Attorney General William Barr again strongly defended the administration’s decision to turn federal forces on peaceful protesters.
He made a series of claims that appeared to be contradicted by evidence, saying that pepper spray is not a chemical irritant and that security forces in Lafayette Square last Monday were the subject of violent attacks.

“They were not peaceful protesters. And that’s one of the big lies that the media is — seems to be perpetuating at this point,” Barr claimed Sunday on CBS’ “Face the Nation.”

“The Park Police was facing what they considered to be a very rowdy and non-compliant crowd. And there were projectiles being hurled at the police.” CNN reporters in the area at the time saw no evidence to support such accusations.

The building showdown over race and policing between Biden and Trump comes at a signature moment in 21st century history in America. Large, diverse crowds chanting “Black Lives Matter” have given some veterans of long civil rights struggles optimism that the country may be reaching a tipping point.

“This moment is incredibly inspiring to see people all across the country saying enough is enough,” Democratic Rep. Karen Bass of California said on CNN’s “State of the Union.”

“In many cities, you look at the protesters and there are very few African Americans, so the solidarity with what is happening in our community … is very inspiring.”

While Trump is using the crisis as an opportunity to double down on his political base strategy, there is also a sense that a President who has walled himself off behind a fence in the White House may be missing a seminal political moment.
Political leaders, NFL bosses, corporations and people from all walks of life have called for change and pledged to reject racism and to work to understand the historic agony of African Americans. On Sunday, former Republican presidential nominee and Utah Sen. Mitt Romney joined evangelical Christians marching in Washington, DC, and tweeted “Black Lives Matter.”

Democrats in Congress are meanwhile gathering behind a policing reform bill that they will lay out on Monday. The measure includes improved police training, greater accountability for police in the courts, bans on choke holds and carotid holds, and limits on the the use of military-grade equipment by state and local governments.

Republicans haven’t signaled any support for the legislation and may be reluctant to support any national effort to set local policing policy.

But in not heeding the protesters’ cries for change, the President — and some of his ever-loyal Republicans in Congress — may be missing a chance to catch the national mood.

A new Wall Street Journal/NBC News poll released on Sunday found that 80% of registered voters believed things are out of control in the United States. And 59% said that they’re more troubled by Floyd’s death than the fact that some of the protests have turned violent.