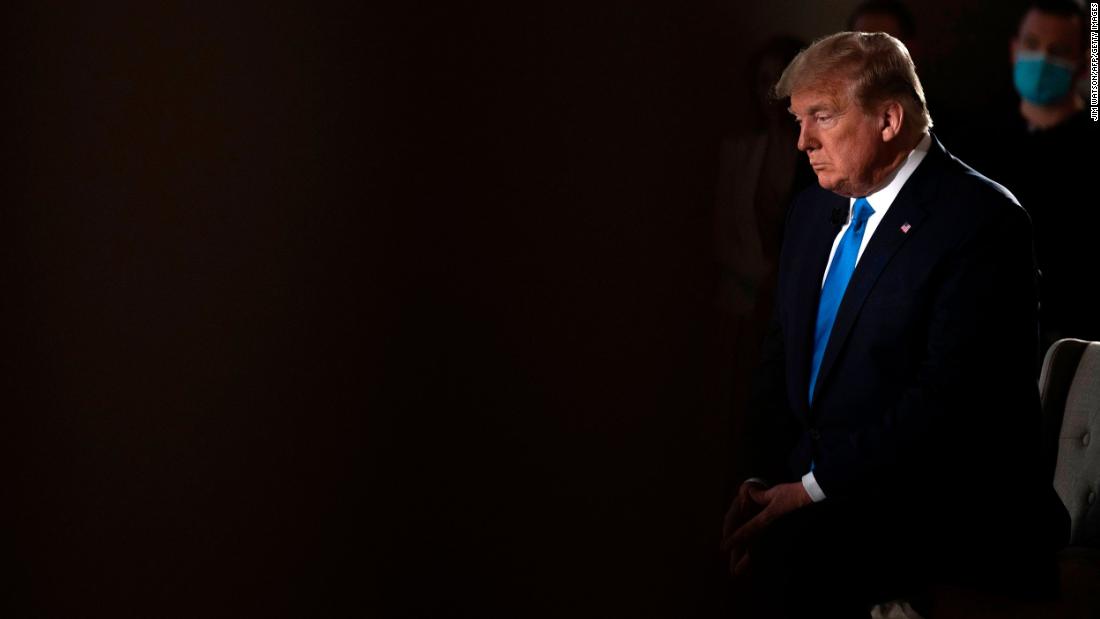 Trump’s comments, at the memorial in Washington to a president assassinated after emancipating the slaves during the Civil War, are likely to further polarize the raging politics of a current crisis that is stretching national unity.

“I am greeted with a hostile press the likes of which no president has ever seen,” Trump said at the Fox News town hall Sunday night.

“The closest would be that gentleman right up there,” Trump said, pointing to the 16th President’s statue. “They always said nobody got treated worse than Lincoln. I believe I am treated worse.”

His statement was classic Trump, not just in his audacity of comparing himself to the man many historians rate as the greatest president, but in his tendency to make every issue — even in the midst of a national tragedy in which tens of thousands of Americans have died — about himself.

It was also striking that the President who has consciously torn at the nation’s political fault lines should make such a partisan argument under the marbled gaze of the man who warned “a house divided against itself cannot stand.”

The President admitted on Fox that his earlier estimates that between 50,000 and 60,000 Americans could die in the pandemic would be outpaced. But he argued that his leadership had been “successful” since the higher end of models used by the White House had previously suggested up to 240,000 people could perish, even with social distancing in place.

“I used to say 65,000 and now I’m saying 80 or 90 and it goes up and it goes up rapidly,” the President said at the memorial, a glorious and spectacular backdrop for the Fox News show that an image-making campaign manager could not have bettered.

The President was making his best case at the start of a critical new period in the battle with Covid-19 that will play out in millions of lives in the six months until Election Day.

The aggressive approach of some governors is already heaping pressure on those who run states still committed to stay-at-home guidelines — even with the virus still rampant in their paths.

With Trump agitating for a spark to the nation’s economic engine, some governors are taking a gamble that in many cases contradicts the best advice of epidemiologists, but if it works, could alleviate some of the crippling unemployment triggered by the pandemic.

The next three weeks or so could show whether a new wave of infections caused by an easing of tough restrictions on daily lives will swarm state hospital systems, significantly increase the death toll and require a return of lockdowns.

In a worrying sign that points to the scale of the coming risks, few, if any, states that are opening have satisfied White House reopening guidelines of a 14-day dip in infections.

But if states like South Carolina, Georgia, Florida and Texas that are opening can provide a blueprint for the “new normal” that will be American life until a vaccine is found, they could point the way to a broader recovery and speed economic rebounds.

The reopening — albeit with many restaurants and businesses at reduced capacity — will also provide a new challenge for the White House, which insisted again Sunday, despite considerable contrary evidence, that it has built sufficient national testing to give states everything they need to safely ease restrictions.

States like New York and Maryland — which have plateaued at fairly high levels from Covid-19 — are warning that easing restrictions too quickly could be disastrous.

“I think everybody has a right to protest and express their feelings. A couple of dozen people did so yesterday. And they have every right to do that,” Maryland Republican Gov. Larry Hogan told CNN’s Jake Tapper on “State of the Union.”

“We sadly, we had far more people die yesterday in Maryland than we had protesters,” he said, warning that some states appeared to be moving toward opening in an unsafe manner.

New York Gov. Andrew Cuomo, a Democrat, also registered concern that gains made against the pandemic by grueling stay-at-home orders could be squandered as the lure of summer drains resolve.

“My gut says the weather is going to warm, people are bored, people want this over. They see the numbers going down. They can take false comfort,” Cuomo said on Sunday.

“We never said it was over. We said the numbers are going down,” he added. “Roughly a thousand new people a day walk into the hospitals.”

Three states, Mississippi, Ohio and Florida — all run by Republican governors — are likely to reflect the intricate adjustments needed in the days ahead as the Covid-19 picture varies state by state and city by city.

The Sunshine State’s Gov. Ron DeSantis is a close Trump GOP ally who has rejected some of the scientific models used by epidemiologists as overstating the likely death toll from Covid-19.

“Even though our hospitalization and infection and fatality rates are much lower than many of these other big states, particularly in the Northeast and Midwest, we did not necessarily — quote — ‘shut everything down,'” DeSantis said on Fox News on Sunday.

“So, we’re starting, I think, a little ahead of where some other states are,” he added.

The quickening push to reopen came after disaster experts told CNN on Friday that states should not begin to open until coronavirus restrictions had been falling for 10 days to two weeks and there were sufficient tests available to assess how many people are really infected.

In a sign of the balancing act governors face, Republican Tate Reeves of Mississippi had planned to announce an easing of restrictions on Friday but changed plans at the last minute due to a spike in infections.

“We are trying to be very cautious and so we said, let’s analyze the data over the weekend,” Reeves said on “Fox News Sunday.”

“What we have found is that it was really a data dump.”

“So it was a one-day blip, but we wanted to make sure we investigate that data before we make a final decision, so we delayed it.”

The new stage of the fight is likely to defy the triumphant comeback narratives of the President. But it may be grayer than the predictions of scientific models and political leaders still stuck in the darkest days of the pandemic may suggest.

DeWine has extended his state’s stay-at-home order until May 29 but expects to announce some easing of restrictions to allow some businesses to reopen in the coming days.

“What I hope is as people see those numbers, if they do go up and if they go up dramatically, that the people of the state will react to that,” DeWine said on ABC News’ “This Week.”

Tension between the White House and some Democratic governors boiled over in a new confrontation involving Gretchen Whitmer, who leads Michigan, a key 2020 battleground state.

Speaking on “State of the Union,” Whitmer rejected a claim by Trump’s son-in-law Jared Kushner that the problem with testing was not supplies nor capacity but in the ability of states to collect sufficient samples.

“That’s not true in Michigan,” Whitmer said, adding that many governors “are still looking to get swabs and reagents and additional test kits. And so we have never been able to get to full capacity because we are missing things in the supply chain.”

Kushner challenged that assertion in an emailed statement to CNN

“(The Federal Emergency Management Agency) and (Department of Health and Human Services) have outlined a pathway to fully supply their request,” Kushner said.

“We are rooting for Governor Whitmer to achieve the ambitious goal she has set and will work with her to get there.”

Looking ahead to his reelection battle, the White House is already appearing to shift more toward an economic message than a science-based fight against the virus.

Trump, consistent with his long-term strategy of encouraging political fervor that could boost his base, has given encouragement to protests — sometimes with armed demonstrators ignoring social-distancing guidelines and refusing to wear face masks — against stay-at-home orders.

Some signs of hope?

Trump top economic advisor Larry Kudlow signaled on CNN’s “State of the Union” that a fresh stimulus and support package for business and cash-strapped states may be on a “pause” while the success of state economic openings is assessed.

More broadly, after weeks of grim news and death — US deaths from Covid-19 are racing toward 70,000 — there are a few glimmers of hope. More and more nations are, like the US entering, a new phase, with the promise of at least alleviating some of the economic horror caused by shutdown economies.

There was even encouraging talk on Sunday by a UK-based team trying to develop a vaccine, while Trump presides over “Operation Warp Speed” with the same ultimate goal.

Trump, however, still spent much of his weekend fixating on Deep State conspiracy theories and scratched his golf itch by finding time to tout his Turnberry resort on Scotland’s West Coast.

Allies despair as Trump a...