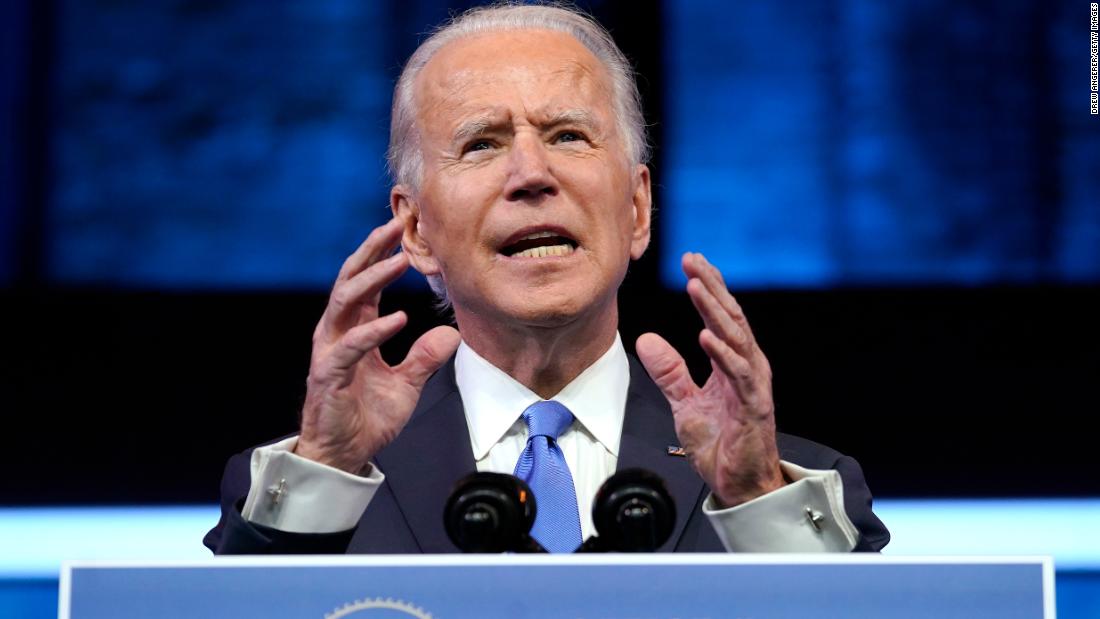 Joe Biden: A new vaccine and a soon-to-be President begin turning the page


Still, after harrowing, disorientating weeks when America’s health and constitutional systems were under assault, Monday offered the promise of a political turning point and a literal shot of hope.

“The flame of democracy was lit in this nation a long time ago. And we now know that nothing — not even a pandemic or an abuse of power — can extinguish that flame,” Biden said in Wilmington, Delaware.

After weeks of measured rhetoric as Trump has tried every avenue to cancel Biden’s win, the President-elect made his clearest statement yet that time was up for baseless claims that the election had been stolen.

He was particularly scathing about a failed attempt by Texas Republicans to get the Supreme Court to throw out millions of legally cast votes in battleground states that he won.

“The integrity of our elections remains intact. Now it is time to turn the page as we’ve done throughout our history. To unite, to heal,” Biden said.

Biden’s statement was a clear effort not just to move the country forward after its most acrimonious modern post-election period. It was also a firm attempt to assert his authority as the incoming president, to create the symbolism of a transfer of power that is being denied by Trump and to begin to establish legitimacy even among Trump supporters.

There is no sign that a President who has constantly ignored constitutional norms is moving any closer to accepting the reality of his defeat.

But there were signs of a crumbling of the ancient regime, as a few of Trump’s Republican allies in the Senate began to grudgingly accept, six weeks after the election, that Biden is indeed President-elect.

One source close to Trump told CNN’s Jim Acosta that while the President has privately conceded he won’t be staying in the White House for a second term, he won’t stop trying to discredit the election.

Another adviser said it was highly unlikely that the President would show up at Biden’s inauguration for a ceremonial tableau that is an emblem of America’s mostly unbroken chain of peaceful transfers of executive authority.

There is also likely to be no cathartic national moment analogous to then-Vice President Al Gore’s graceful December concession speech after a bitter legal battle handed the presidency to George W. Bush in 2000.

Trump’s behavior is certain to complicate Biden’s call for healing. There is still a chance that Republicans in the House — who remain in Trump’s thrall — will try to mount a futile rear guard to challenge the election result when Congress holds a joint session on January 6 to tally the results of the Electoral College.

That daylong votes of the Electoral College on Monday were anything more than a perfunctory ritual underscored the political poison laced inside American politics by Trump.

The President’s malfeasance has convinced many of the more than 70 million people who voted for him that the election was stolen, a dynamic that is likely to continue to be corrosive in the run-up to the midterm elections in 2022. He suggested in a Fox News interview over the weekend, for instance, that Biden would be an “illegitimate” president.

“There is a reign of terror that is going to continue beyond this election, and that is my fear,” David Axelrod, a former senior adviser to President Barack Obama and a CNN political analyst, said on Monday.

Some Republican senators reacted to the latest events by finally admitting that Biden would be the next president, after indulging Trump during his avalanche of baseless claims that the election was corrupted.

“We’ve now gone through the constitutional process and the electors have voted, so there’s a President-elect,” Sen. Roy Blunt of Missouri, the chair of the committee that plans the inauguration, told CNN’s Manu Raju. Another member of the GOP Senate leadership team, Sen. John Thune of South Dakota, also acknowledged that Biden had secured the necessary 270 electoral votes.

One of Trump’s closest Senate allies, Lindsey Graham of South Carolina, insisted, improbably, that the President still had a “very, very narrow path,” and revealed he had recently spoken to Biden.

But other Republican senators lacked the courage to offer even this grudging acceptance of Biden’s win and refused to talk to reporters.

The last nine months have been a relentless and demoralizing march of sickness, death and the rituals of normal life — work, family ties, friendship and free movement — shut down by lockdowns and a killer pathogen.

So the euphoria that greeted the first vaccinations of front-line health workers might have obscured the fact that it will be months before most Americans get the same — but it provided a rare sign that the future will be better. The Trump administration deserves some of the credit for the swift development of the vaccine, along with pharmaceutical firms, government scientists, independent researchers across the globe and medical advances that have been years in the making.

Fauci, a voice of fact-based reason during the pandemic — whose role will expand under Biden — celebrated the human endeavor that sequenced a new virus in January and delivered a 95% effective vaccine in December.

“That is a historic, unprecedented achievement,” Fauci said at a Center for Strategic and International Studies virtual event. But the nation’s top infectious diseases specialist also recognized the tragic duality of the moment, shortly before Monday’s awful milestone was reached.

“We have almost 300,000 deaths. That’s the worst public health catastrophe in 102 years — since the 1918 pandemic,” Fauci said. On MSNBC, he said he believed there would be sufficient vaccine to effectively stop the spread of Covid by the end of the second quarter. That would mean a return to beach trips, family visits, the workplace — for those who still have jobs — inside dining in restaurants, trips to the theater and big crowds at sporting events.

But before then, Americans face months of social distancing, mask wearing and bereavement as scientific modeling predicts tens of thousands more deaths.

And everything will have to go right in the massive logistical operation to vaccinate Americans — in production plants, supply chains and on the health care front lines — for Fauci’s optimism to be realized.