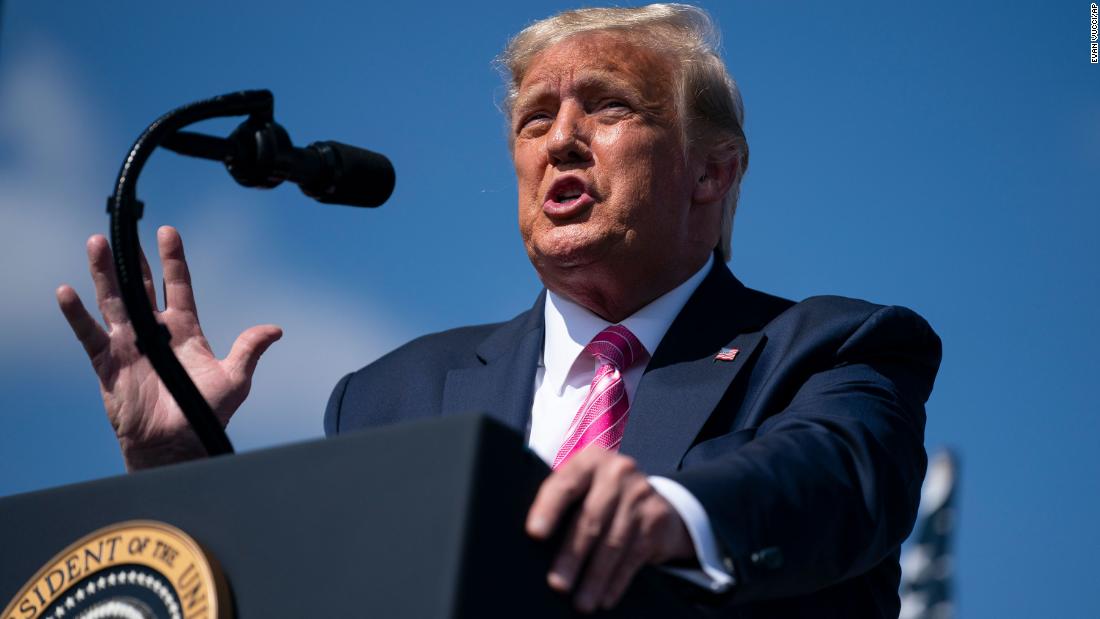 “We are not going to control the pandemic,” Meadows told CNN’s Jake Tapper on “State of the Union” Sunday, arguing that “proper mitigation factors” like therapies and vaccines should be the priority.

The window into the administration’s thinking came as Trump spent the weekend constructing a giant confidence trick for voters, declaring the country was “rounding the corner beautifully” in the battle against Covid-19.

The latest signs that Trump is putting his political priorities ahead of his duty of care to the American people come as the President plans a frantic week of packed rallies that flout good social distancing practice.

View Trump and Biden head-to-head polling
But the weekend of grim health data and controversy means the climax of the campaign will be overshadowed by the pandemic — a tough reality for Trump since 60% of Americans in a recent CNN Poll disapproved of his crisis management. The President has all along downplayed the threat from the virus. He mocked mask wearing, turning the practice into a culture war issue, and pressured Republican governors to open their states before the virus was under control, helping to unleash a wave of infections in the Sun Belt during the summer. As a result, his handling of the pandemic is a central campaign issue, and his behavior in recent days signals there will be no change to the White House’s approach to the pandemic if he wins the election — no matter how bad the virus gets this winter.
The final week of the campaign opens with Trump trailing Biden in national popular vote polls by 9 or 10 points and by smaller margins in many of the states that will decide the election on November 3. If the polling is accurate, Trump does have a narrow path to reelection but will need to make good on his vow to massively expand his political base with new conservative voters, and he will have to almost run the table in competitive states.
Remarkably, more than 58 million Americans have cast early ballots, surpassing all early voting in the 2016 election, meaning that it will be more difficult for either candidate to shake up the dynamics of the race at the last minute. Biden appears to have more routes to the 270 electoral votes needed for victory, but Democrats are nervous after a late surge by Trump in 2016 carried him to a shock victory over Hillary Clinton.
“I’m one of those folks, or competitors, it’s not over till the bell rings. And I feel superstitious when I predict anything other than going to be a hard fight,” Biden said in an interview aired on CBS’ “60 Minutes” on Sunday when asked whether Trump could still defeat him. “We feel good about where we are. But, you know, I don’t underestimate how he plays.”

The extent to which the White House has all but given up fighting the pandemic — for instance, public briefings by top government scientists have disappeared — was made clear by Meadows.

The issue with his comments is that a vaccine, even if it is approved by regulators in the coming months, is unlikely to be available to all Americans by well into next year. The kind of state-of-the-art treatments that helped Trump beat his case of Covid-19 are not yet available to the general public or the tens of thousands of Americans now getting infected every day. Public health officials like Dr. Robert Redfield, the head of the CDC, have said masks are one of the most powerful weapons to fight the virus.

Biden leapt on Meadows’ comments as he tries to make a case that Trump’s denial and downplaying of the greatest public health crisis in 100 years means he should be disqualified from serving a second term.

He said the White House chief of staff had “stunningly admitted this morning that the administration has given up on even trying to control this pandemic, that they’ve given up on their basic duty to protect the American people.

“This wasn’t a slip by Meadows, it was a candid acknowledgment of what President Trump’s strategy has clearly been from the beginning of this crisis: to wave the white flag of defeat and hope that by ignoring it, the virus would simply go away. It hasn’t, and it won’t.”

The President and Pence — the head of the coronavirus task force — have consistently refused to model the social distancing and mask wearing that is the most effective way to cut infections until treatments and vaccines arrive.

On Sunday for instance, the President mixed with supporters who were unmasked and closely huddled together, offering fist bumps and signing “Make America Great Again” hats.

That is exactly the wrong message the President should be sending given a new modeling study from the University of Washington’s Institute for Health Metrics and Evaluation that notes that in September only 49% of Americans reported that they “always” wear a mask in public. If that number was 95%, more than 100,000 lives could be saved from Covid-19 through February, according to the study.
In a new opinion piece in The Wall Street Journal on Sunday, Dr. Scott Gottlieb, the former commissioner of the Food and Drug Administration, warned that it might be time to consider a limited and temporary national mask mandate.

“Deaths are starting to rise again, and vaccines won’t be widely available until next year even in the best-case scenario. Everyone banding together to wear masks, for a limited time, will be the least costly way for society to weather a difficult winter,” Gottlieb wrote.

Even as news broke of the multiple infections in the vice president’s office, the White House declared he was an “essential worker” — a designation normally reserved for first responders and front-line medical staff — and said he would go on with his campaign program.

Pence, who was wearing a mask, clapped and jogged up to his podium at an event in North Carolina Sunday, the latest attempt by Trump and his team to foster a false impression of normality as the crisis deepens every single day. He never brought up the infections among his inner circle, barely mentioning the virus at the rally.

But the virus is now rising in 35 states and is steady in 15. New infections rose past 80,000 cases on both Friday and Saturday, breaking previous single-day records. US Surgeon General Dr. Jerome Adams cautioned Friday that hospitalizations are up in 75% of the jurisdictions across the country. Deaths will likely also soon start rising.

The utter disconnect between the fast worsening reality and the behavior of Trump and Pence prompted David Gergen, an adviser to presidents of both parties who was speaking on CNN, to condemn what he said was, “a President and a vice president putting their own peoples’ lives at risk to advance their own political good fortunes.”

Build your own road to 270 electoral votes with CNN’s interactive map
The comments by Meadows appeared to be in line with the philosophy of White House adviser Dr. Scott Atlas, who has the President’s ear and has infuriated government scientists on the White House coronavirus task force. Atlas has cast doubt on mask wearing and appears to favor an approach akin to herd immunity — letting the virus circulate freely in society to build resistance among citizens. Such an approach could cost hundreds of thousands more lives, according to William Haseltine, chair and president of ACCESS Health International.

Meadows’ statement also had troubling echoes for another expert.

“I hear a lot of herd immunity in that statement and that is horrifying,” Dr. Jonathan Reiner, a professor of Medicine at George Washington University, told CNN on Sunday.

“We can control the pandemic,” said Reiner, citing Washington, DC’s low incidence of the virus after earlier spikes and crediting mask wearing for the improved situation..

“What the chief of staff is saying is surrender. No, no, no, we get everyone to mask up — that is how we get the rates down.”

The responsibilities of leaders

The comments by Meadows caused awkward moments for several Republican senators, in town to advance the Supreme Court nomination of Amy Coney Barrett to a final floor vote on Monday.

“We all have control, and we all have responsibility as leaders to set an example that consists of doing the right thing to stop the spread,” the second-ranking Senate Republican, John Thune of South Dakota, told reporters.

“There are certain elements of it that yes, we cannot control. It’s a virus. It’s very aggressive. It wants to infect a lot of people, but there are things about our own behavior that we can control.”

The other South Dakota senator, Mike Rounds, said the government should “definitely not” stop trying to control Covid-19. Indiana Republican Sen. Mike Braun advised throwing “the kitchen sink at getting the virus under control.”

The new cases of Covid-19 in the White House could not be closer to Pence.

Marc Short, his chief of staff, tested positive on Saturday, the vice president’s office announced in a statement late in the day. Sources told CNN that Marty Obst, a senior adviser to Pence who is not a government employee, and at least three staffers in Pence’s office also tested positive for the virus in recent days. Zach Bauer, a longtime aide and one of the staffers who works closest with Pence, has tested positive for coronavirus, CNN learned Sunday.

New fears about coronavirus at the White House will not stop Trump swearing in Barrett after her expected Senate confirmation on Monday — despite the fact that her Rose Garden announcement ceremony last month turned into what the government’s top infectious disease specialist Dr. Anthony Fauci called a “superspreader” event.

The event is due to take place at 9 p.m. ET, outside, a source familiar with the invitation told CNN.