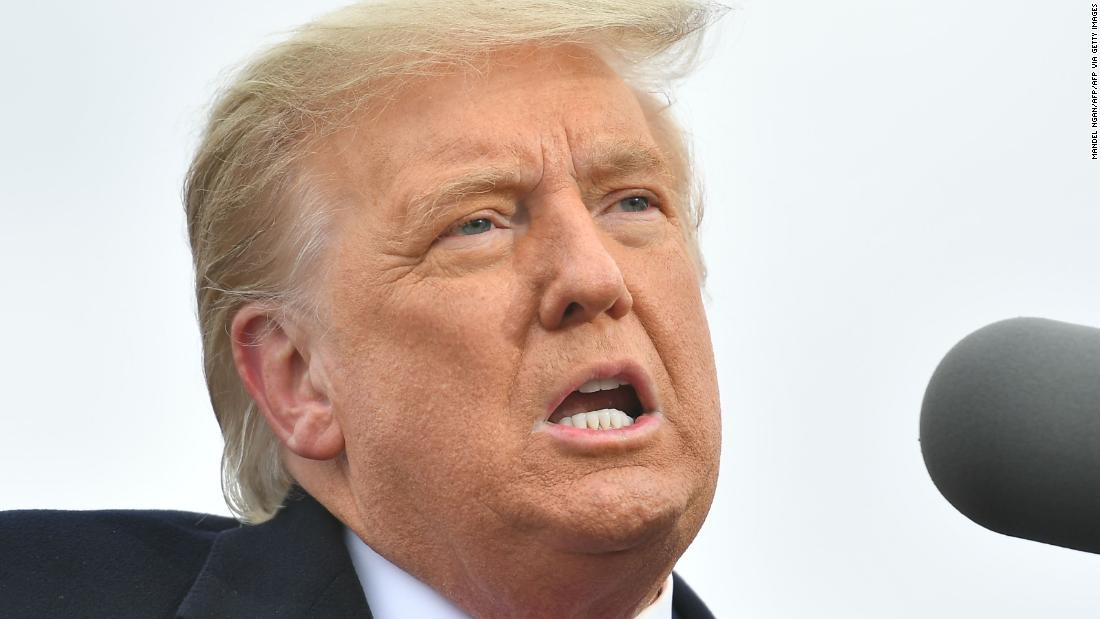 “Our doctors are very smart people. So what they do is they say, ‘I’m sorry but everybody dies of Covid,’ ” Trump said at a rally in Waterford Township, Michigan, on Friday. Unearthing conspiracy theories from the bowels of the Internet, the President claimed with no evidence that doctors from other countries list underlying diseases as the cause of death, while US doctors choose coronavirus.

Trump’s falsehood about doctors on the front lines of the pandemic angered Biden, who criticized the President for attacking first-responders at his subsequent rallies in Falcon Heights, Minnesota, and in Milwaukee.

“The President of the United States is accusing the medical profession of making up Covid deaths so they make more money. Doctors and nurses go to work every day to save lives. They do their jobs. Donald Trump should stop attacking them and do his job,” Biden said in Minnesota.

View Trump and Biden head-to-head polling
The clashing messages of the two candidates stood in stark contrast as they both campaigned in Wisconsin and Minnesota on Friday, with each man attempting to broaden his potential path to 270 electoral votes. Trump won Wisconsin by less than a percentage point in 2016 but narrowly lost Minnesota, and he and Biden are now vying for those pivotal blue-collar voters who abandoned Democrats four years ago to choose Trump’s outsider message.
Though some of those voters have drifted away from the President because they disapprove of his handling of the virus, he has continued to insist on holding huge rallies — he has more than a dozen planned in seven states before Election Day, including four in Pennsylvania on Saturday alone — which only draws attention to the fact that he is dangerously flouting the safety guidelines of his own experts at the US Centers for Disease Control and Prevention, daring Americans to hold him accountable for it on Election Day.

Biden delivered a closing argument grounded in his desire to unify the country and be a president for all people, pledging to work “as hard for those who don’t support me as those who do.”

The former vice president told Minnesota voters that Trump has “simply given up” and questioned how many lives could have been saved if Trump had been candid with the American people about the risks the virus posed early this year. The former vice president also pleaded with voters not to give up their sense of optimism, while acknowledging that was a difficult request at a time when nearly 230,000 Americans have died from the virus.

Meanwhile, Trump slashed against the “arrogant, far-left political class,” suggested Biden would flood Minnesota with terrorist refugees, and made the wild claim that Democrats like Biden want to “imprison you in your homes while letting anarchists, agitators and vandals roam free as they destroy your cities and states.”

Trump’s claims about profiteering doctors sparked a backlash beyond the campaign trail. Susan Bailey, the president of the American Medical Association, said in a statement that the claim that doctors are overcounting Covid-19 patients or “lying to line their pockets is a malicious, outrageous, and completely misguided charge.”

“Covid-19 cases are at record highs today,” Bailey said as Friday marked the highest single day of cases in the United States since the pandemic began. “Rather than attacking us and lobbing baseless charges at physicians, our leaders should be following the science and urging adherence to the public health steps we know work — wearing a mask, washing hands and practicing physical distancing.”

Emergency physician and former Baltimore Health Commissioner Dr. Leana Wen told CNN’s Wolf Blitzer on Friday night that doctors are risking their lives at a time when one person is now being diagnosed with Covid-19 every second.

“We have one American dying of coronavirus every two minutes, and that number is increasing,” Wen said on “The Situation Room.” “In some states, one in two people who are getting tested are testing positive. That means that we’re not doing nearly enough testing, and that every person who tests positive is a canary in a coal mine.”

Wen added that there are likely to be “many more dozens of other cases that we’re not detecting, and that escalation is going to increase in the weeks to come.”

The angry tone of Trump’s rallies and his attacks on doctors stem in part from his frustration that the country is so focused on the pandemic in the closing days of the election. Poll after poll has shown that coronavirus is the top issue on the minds of American voters and a broad majority of the electorate disapproves of Trump’s handling of the virus.

While Trump has gotten away with holding large rallies in other states, Minnesota has been particularly vigilant both with enforcement and contact tracing, and Trump lashed out on Friday at Minnesota officials who curtailed the size of his rally due to safety concerns.

The Minnesota Department of Health reported three Covid-19 outbreaks related to Trump campaign events held in the state in September. The state’s health department has linked at least 23 cases to Trump campaign rallies with the President in Bemidji and Duluth and a rally with Vice President Mike Pence in Minneapolis, according to information the department provided to CNN in an email last week.

But dismissing safety concerns as irrelevant, Trump argued that state officials, including Minnesota Attorney General Keith Ellison, a Democrat, have created two sets of standards — one for the protesters who demonstrated against police brutality after the police killing of George Floyd in Minneapolis in May and a different set for his supporters.

“Keith Ellison sided with flag burning extremists over law-abiding Americans. He treats you like second-class citizens,” Trump said in Rochester, Minnesota, on Friday night where state officials limited the crowd to 250 people. “He believes that the pro-American voters have fewer rights than anti-American demonstrators.”

As part of that argument, Trump once again conflated Black Lives Matter demonstrations, which were largely peaceful across the country this year, with the far smaller number of protests that turned violent and have served as a helpful foil as he tries to argue that Biden would coddle criminals while fomenting what he described as “vile anti-police rhetoric.”

Speaking in Falcon Heights, a suburb of St. Paul, Biden refuted that argument by zeroing in on the difference between peaceful protesters and violent agitators who took advantage of this year’s movement for racial justice.

“Burning and looting is not protesting, it’s violence clear and simple — and will not be tolerated,” Biden said at his event, which he said was seven miles from where Floyd was killed by a police officer. “But these protests are a cry for justice.”

The former vice president argued that Trump’s divisive language about the protests and his effort to pit Americans “against one another based on race, gender, ethnicity and national origin” are part of an effort to distract from his handling of the pandemic.

During his final event of the day in Milwaukee, Biden noted that the state is now experiencing a record level of coronavirus hospitalizations.

“This week, Wisconsin, like other states, set a new record for daily cases. Hospitals are running short on beds, just had to open a field hospital. That’s what we’re facing. We’ve now hit 9 million cases,” Biden said Friday night. “Millions of people out of work; on the edge and they can’t see the light. They’re not sure how dark it’s going to remain … and the thing that bothers me the most was a President who gave up.”