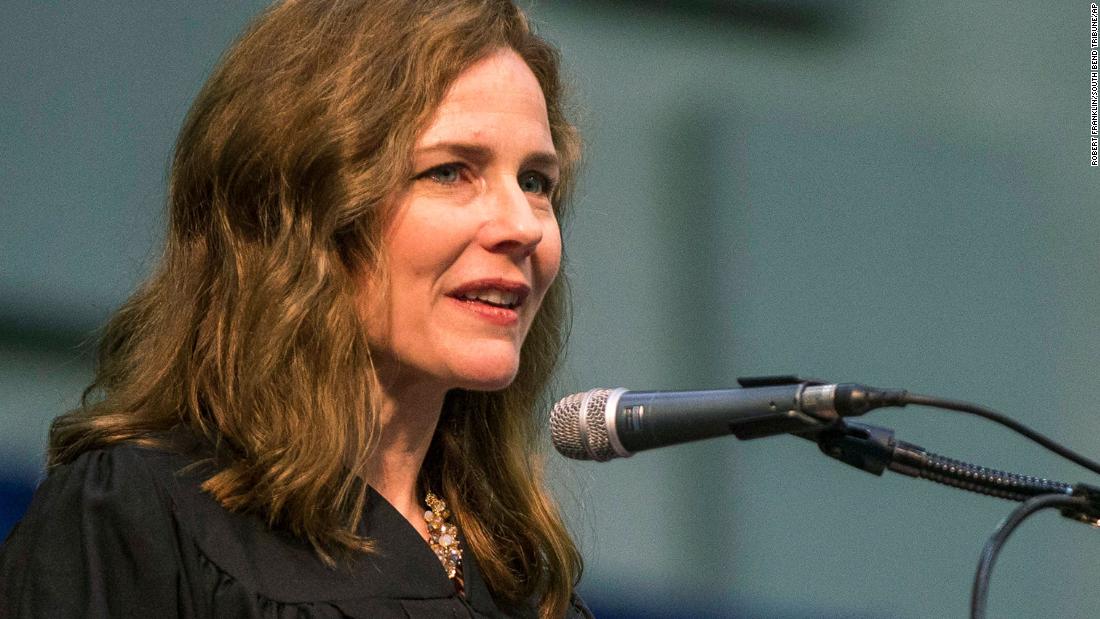 In conversations with some senior Republican allies on the Hill, the White House is indicating that Barrett, a federal appellate judge and Notre Dame law professor, is the intended nominee, multiple sources said.

All sources cautioned that until it is announced by the President, there is always the possibility that Trump makes a last-minute change but the expectation is Barrett is the choice. He is scheduled to make the announcement on Saturday afternoon.

A former law clerk to the late right-wing beacon Justice Antonin Scalia, Barrett would tilt the balance of power on the court further to the right, possibly ahead of a consequential case on health care to be argued the week after Election Day. If her Senate confirmation is successful before the November election, the appointment would mark Trump’s third Supreme Court pick in one presidential term, cementing a conservative stronghold in the court for a generation.

She has been the leading choice throughout the week, since Justice Ruth Bader Ginsburg died. She is the only potential nominee known to have met with the President in person, according to two of the sources. One source said Trump was familiar with Barrett already and he met with her since she was a top contender the last time there was a Supreme Court vacancy, when the President chose Justice Brett Kavanaugh instead.

Barrett was seen at her South Bend, Indiana, home on Friday. It was not clear if Barrett had been told she is the choice. Often that is done as late as possible to maintain secrecy around the announcement.

“The machinery is in motion,” one of the sources said. In previous nomination announcements, the White House had multiple rollouts planned in case the President made a last-minute decision to switch to another candidate. But one source said it would be surprising if there were a change since allies are already being told.

“She was the plan all along. She’s the most distinguished and qualified by traditional measures. She has the strongest support among the legal conservatives who have dedicated their lives to the court. She will contribute most to the court’s jurisprudence in the years and decades to come,” according to a former senior administration official familiar with the process.

The mother of seven children, Barrett, now 48, was confirmed in 2017 for her current judgeship on the 7th US Circuit Court of Appeals, which covers Indiana, Illinois and Wisconsin. Born in New Orleans in 1972 and a 1997 Notre Dame law graduate, Barrett worked in private practice and then became a law professor, settling at Notre Dame in 2002.

Advocates on the right have backed her possible nomination because of her writings on faith and the law. Religious conservatives were especially energized for Barrett when, during her 2017 confirmation, Democratic Sen. Dianne Feinstein of California suggested to her that the “dogma lives loudly within you.” Barrett supporters believed the nominee was being disparaged for her Catholicism.

Senate Majority Leader Mitch McConnell has made clear in conversations with Trump and White House counsel Pat Cipollone that the Senate GOP conference would be comfortable with Barrett, two people with knowledge of the conversations told CNN earlier this week. Sen. Todd Young, who hails from Barrett’s home state of Indiana and leads the Senate Republican campaign arm, has also been an advocate, the people said.

The President indicated he has spoken to multiple candidates, but the White House has not been willing to say if other conversations were in person.

Barrett was at the White House on Monday and Tuesday of this week. She impressed the President and others during the initial meetings, two sources told CNN earlier this week.

This story has been updated with additional biographical details about Barrett.

Joan Biskupic and Maegan Vazquez contributed to this story.