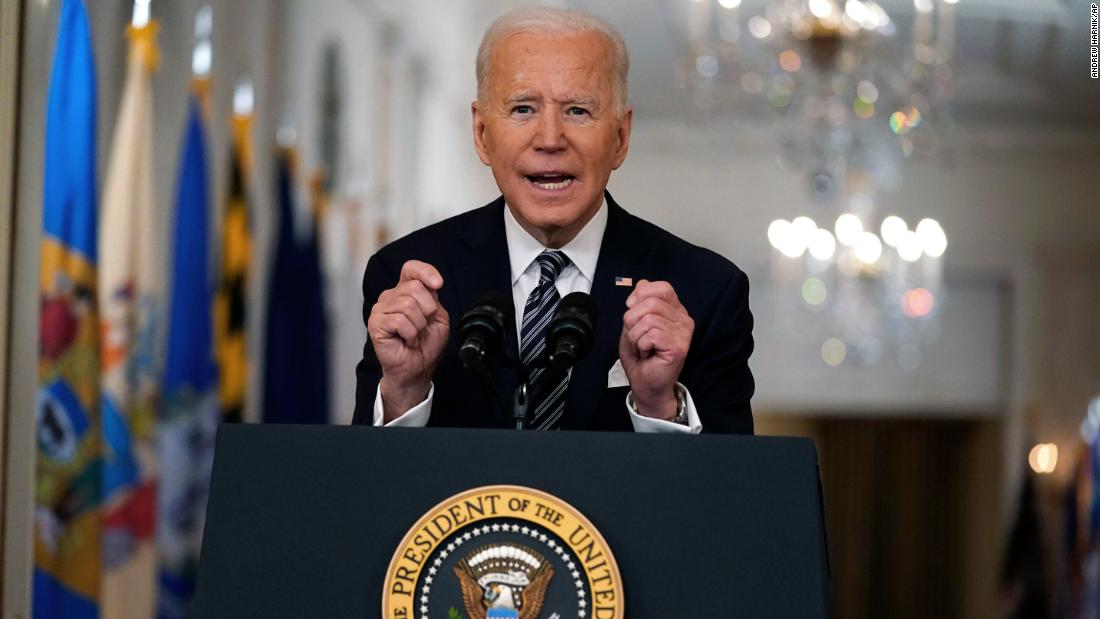 My takeaways from Biden’s speech, which ran just over 20 minutes, are below. They’re in no other order than the order that I jotted them down while watching the speech.

1. Donald Trump dug the hole: Biden didn’t mention his predecessor by name, but especially in the early moments of his speech, it was very clear that the current President lays much of the blame for the country’s struggles with the coronavirus pandemic at the feet of the last President. “A year ago, we were hit with a virus that was met with silence and spread unchecked, denials for days, weeks, then months,” Biden said at one point. “That led to more deaths, more infections, more stress and more loneliness.” At another point, Biden pulled out his mask and expressed amazement that it had been turned into some sort of political statement.

2. The return of empathy: Biden made a single gesture in the speech that demonstrated the empathy he operates with vis a vis the lives lost to this pandemic. He pulled a card out of his jacket pocket — which he said he keeps with him wherever he goes — and read off the exact, up-to-date number of Americans who have died from the coronavirus. (That number is more than 527,000.) Yes, of course, Biden did that for dramatic effect. But it worked. And it drove home the idea that this is a leader who keeps those who have died from the pandemic close to his heart — literally. It also provided a not-so-subtle contrast with Trump’s overt politicization of the virus and those who succumbed to it.

3. At war with the virus: In the language he chose — and the comparisons he made — Biden clearly wanted to make Americans understand that we are at war with Covid-19. He said the country was on “war footing.” He noted that Covid-19 had now killed more Americans than World War I, World War II and the Vietnam War combined. Even in quoting “Farewell to Arms” — “many are strong in the broken places” — Biden was invoking Ernest Hemingway’s novel about World War I. The message was clear: This isn’t an enemy like the United States is used to battling. But it is an enemy nonetheless, and the need for sacrifice and unity is as great as it was when America was fighting the Axis powers.

4. Truth matters: Again, per No. 1, Trump wasn’t mentioned by name in this speech, but he was all over it. “We know what we need to do to beat this virus; tell the truth, follow the science, work together,” Biden said at one point, a direct rebuke to Trump’s rejection of facts and science about the coronavirus during the course of the 2020 campaign. “You’re owed nothing less than the truth,” Biden said at another point. And even while sounding a mostly optimistic note about a return to normal — more on that below — Biden was open and transparent that things could go sideways, that variants of the virus are out there, and that if proper mitigation practices were not followed we could be in for another surge.

5. U-N-I-T-Y: In the most remarkable moment of the night, the President of the United States stared into the camera lens and told the American people, “I need you.” Then he said it again: “I need you.” (The Washington Post’s Scott Wilson called it the “most memorable and unusual appeal in prime-time presidential speech making.”) Time and again in the speech, Biden talked about the power of the “we” in overcoming Covid-19. He talked about the need to find a “common purpose.” He said that “beating this virus and getting back to normal depends on national unity.” And that “I need every American to do their part.” The idea of America coming together to do this stood in stark contrast to the Trump presidency, in which the 45th President sought — on the coronavirus to immigration to race — to emphasize what divides us rather than our common humanity. “This is the United States of America and there’s nothing we can’t do when we do it together,” Biden said in the closing moments of his speech.
6. Circle July 4: Biden said that by Independence Day, “there’s a good chance … you’ll be able to get together and have a cookout or a BBQ in your backyard.” Never did hanging out in my backyard with a few friends on a likely sweltering summer day in DC sound better! As NBC’s Craig Melvin noted: “Well it seems July 4th, Independence Day, takes on new meaning. It’s a marker now.” That’s exactly right. July 4 is now the day — or around the day — when the country will begin to return to some semblance of normal, at least according to Biden. Now he needs to make good on that pledge or have the date hung around his neck like a political anchor — a la Trump’s ridiculous pledge that we would start to return to normal on Easter Sunday 2020.
7. “Hope is a good thing, maybe the best of things”: That line — spoken by Andy Dufresne (Tim Robbins) to Red (Morgan Freeman) in “The Shawshank Redemption” kept popping into my head throughout Biden’s speech. (Maybe it’s because “Shawshank” was trending on Twitter around the same time Biden spoke!) Biden used his speech, yes, to detail the losses we have suffered — singularly and collectively — from Covid-19. But he also pointed toward a hopeful future that was within our grasp as long as we continued to work together. “There is hope and light and better days ahead,” Biden said near the end of the address — and the image that popped into my mind was Red walking on that beach in Zihuatanejo as Andy works on his boat. What a beautiful moment.